The United States Navy Concert Band will kick off the Summer Concert Series on June 27 at 7:00 p.m. with an array of marches, patriotic selections, orchestral transcriptions and modern wind ensemble repertoire. As the original ensemble of the Navy Band and one of the finest wind ensembles in the world, the Navy Concert Band has been performing and participating in high-profile events for over 85 years.

On July 25, the Series will feature a performance by the United States Army Band Downrange. Downrange is known for their modern repertoire of rock, pop, country, R&B and inspirational signature patriotic arrangements.

The fourth performance, on August 1, spotlights the United States Navy Band Cruisers. This elite group is comprised of eight of the Navy’s most dynamic performers. The Cruisers capture audiences with their range of genres from jazz and standards, rhythm and blues, classic rock, adult contemporary and pop as well as original material.

The United States Navy Band Sea Chanters will perform on August 22. The Navy’s official chorus, the ensemble performs music ranging from traditional choral fare to opera, Broadway and contemporary music. The chorus performs publicly across the United States as well as for the President, Vice President and numerous other domestic and foreign dignitaries.

On August 29, the Series concludes with a performance by the Quantico Marine Corps Band. Made up of 50 musicians, this is one of the oldest bands in the U.S. Marine Corps.

The concerts will be held outdoors on the National Museum of the Marine Corps entry plaza, weather permitting. Guests are encouraged to bring lawn chairs or picnic blankets. Concessions will be available and the Museum gift store and Tun Tavern will remain open until the concerts begin at 7:00 p.m. Admission and parking are free. In case of inclement weather, the concert may be moved inside to the Museum’s Leatherneck Gallery.

For more information on the Marine Corps Heritage Foundation’s Summer Concert Series and other summer programming at the National Museum of the Marine Corps, including Family Days, History in Your Hands and special exhibitions, visit www.marineheritage.org and www.usmcmuseum.com. 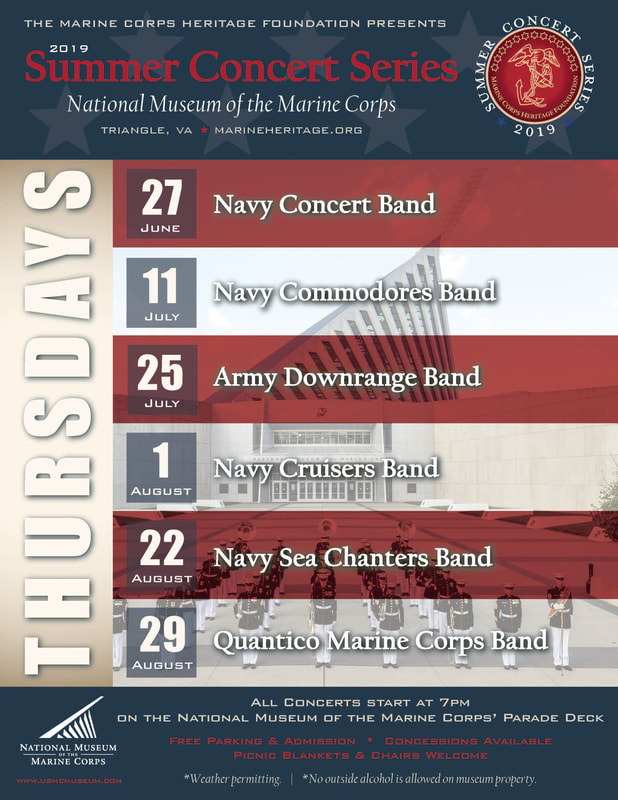